Thank you to the Arizona Daily Star for sending a photographer to our "Silver Screen" show! Please clicko see the pictures! 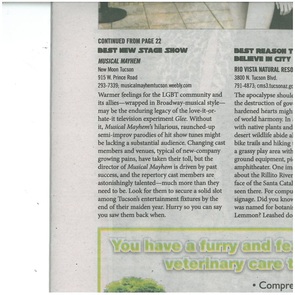 Musical Mayhem Cabaret in the Arizona Daily Star - May 2012:

Musical Mayhem Cabaret Performs on The Morning Blend on KGUN9: 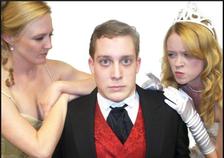 Whether you're a Broadway fanatic, or the mere thought of show tunes makes you want to hurl, you should find something to like at Musical Mayhem Tucson's take on the Great White Way.
The Tucson branch of Musical Mayhem Cabaret, which was founded in Phoenix, is a musical-comedy troupe ready to dazzle the Tucson community with its twist on Broadway shows including Avenue Q,The Music Man and Chicago.
Dana Cianciotto, creator of MMT and the Tucson group Not Burnt Out Just Unscrewed, looks forward to the debut, especially after the Phoenix branch's success.
"I feel like I can definitely fill a void that Tucson theater (has) right now," Cianciotto said. "This is a completely brand-new animal."
The Tucson cast features different actors from the Phoenix group, although Cianciotto plans guest appearances by the Phoenix group in the future.
A Musical Mayhem show has a cabaret atmosphere. The audience is encouraged to drink up while cast members are busy cracking jokes and bantering with audience members during the two-act show.
Act 1 features classic Broadway tunes, such as numbers from The Music Man, which should appeal to older audience members. The younger set will be served with tunes from modern musicals such asRent.
Spontaneity is at the heart of Musical Mayhem's humor, Cianciotto said.
"We want the audience to feel like they are seeing a joke for the first time, as opposed to a show that's been rehearsed and beaten into the ground. (Cast members) have free will and come up with stuff on their own. And it will be absolutely hilarious. If an audience is seeing a joke for the first time, we are, too."
Tickets are $5. The show is aimed at people 15 and older. —S.V. 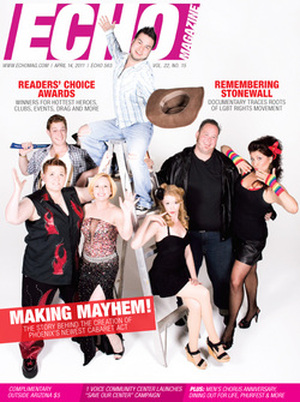 When Musical-Mayhem Cabaret did its first show in February at the Herberger Theater Center, Dana Cianciotto warned the audience that they weren’t about to see a polished show produced by the venue’s resident company, the Arizona Theater Company. “We’re under rehearsed and overly dramatic, and we really mean it,” Cianciotto told those attending. That didn’t seem to bother anyone as an audience kept showing up for 10 performances of Musical-Mayhem’s show, Then and Now.

And the group quickly developed a fan base that just weeks after the show nominated Musical-Mayhem for Echo Magazine’s Readers’ Choice Awards in three categories — Hottest Theatrical Production, Hottest Theater Group and Hottest Musical Performers. While the first-time nominees settled for a runner-up mention in one of the categories, Cianciotto said she was thrilled with the recognition so soon after their debut. All that hotness was assembled on the fly, according to Cianciotto, the troupe’s artistic director. She and her partner, Musical-Mayhem’s co-founder Erin Meyer, held auditions for the four-man, nine-woman troupe just days before that first show at the Herberger’s Kax Stage.

Organizing the troupe
After living for a time in New York City, the women felt that something was missing from the Phoenix entertainment scene. “We both missed the piano bars in New York where you can go in and sing,” Cianciotto said. “It’s just this really friendly, fun atmosphere where everyone’s having a great time.” Around the first of the year, Cianciotto started thinking, “Why don’t we go ahead and start something like that ourselves?” Five days later she and Meyer held auditions for more than 50 people who were attracted by Internet postings. “We dove right in, and since then everything has fallen into place,” Cianciotto said. The women had something in mind about what kind of people they wanted in their troupe, and to find it Cianciotto said they tricked the hopeful performers by giving everyone the same audition time. The idea was to get everyone in a small room and “see whose personalities were going to rise to the top,” Cianciotto said. They were not only looking for voices, but “for people who had that personality to go along with the voice,” she said. “It’s a very diverse group of people we put together,” Cianciotto said. “Somehow it all just seems to work.”

Cianciotto said Musical-Mayhem is “color blind, gender blind and sexual preference blind.” For example, a man may sing a song that is traditionally a woman’s song. Three members of the cast are out “and there are some probably on their way out,” she speculated. Cast members’ ages range from 19 to 51, Cianciotto said, and experience ranges from professional to first-time performers. The troupe’s let’s-put-on-a-show spirit started during about 10 days of rehearsals, where bits were developed with the idea “let’s see if this works,” Cianciotto said. “We put it all in a blender and this is kind of what happened.”

With no time to arrange ads to promote the first production, a social media campaign brought 60 to 90 people to the each of the shows at the 118-seat black-box theater. The troupe also did “guerilla advertising” when they broke into song at a local restaurant and appeared at the Channel 12 sidewalk studio, gaining some media attention.

Musical-Mayhem on stage
The show included 30 to 40 songs. But since each show featured cast members who were available on certain days, each performance was a little different, Cianciotto said. “With us, it’s never the same thing,” she said.  The first act — the Then in Then and Now — focused on classic Broadway “for the old people in the audience,” Cianciotto said, and included songs from Oklahoma and South Pacific. The second act was more modern Broadway, with songs from shows like Rent and Little Shop of Horrors.

Musical-Mayhem’s audience also was a diverse group. Cianciotto said drag kings would be sitting next to little old ladies, theater patrons who may have seen the show promoted on the Herberger Web site. “We were afraid they would be offended, but they loved it,” she said. Cianciotto said she knew that there were gay boys in the audience when she heard them singing along with performers. During some numbers, cast members talked to the audience — and sometimes
the audience contributed their own dialogue. In one bit, Cianciotto and Meyer sang “My Junk” from Spring Awakening as a love song that ended with a kiss. “It’s not our main goal to open people’s minds, but if we can do that, it’s even better,” she said.

Another favorite was a scene that features the song “Part of Your World” from The Little Mermaid, with a performer in a mermaid costume with her legs tied together. Other members of the cast created a sea-life atmosphere, including someone selling fish tacos. “It’s so silly, yet it worked every single night,” Cianciotto said. While Musical-Mayhem is a start-up for now, Cianciotto said she hopes that it develops into something that could provide an income, perhaps as a casino gig. The group recently performed in Casa Grande and they’re in talks with venues, including a possible return engagement at the Herberger, she said. 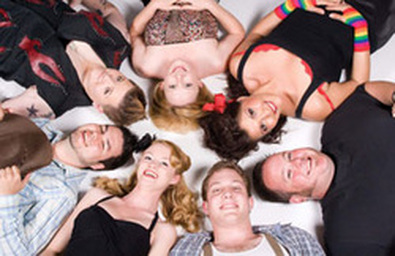 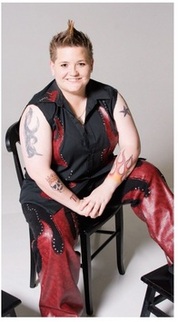 Echo Magazine April 2011
Dana Cianciotto says she’s been involved in theater on and off her entire life, but Musical-Mayhem is her first foray into cabaret.  Originally from New York, Cianciotto moved to Arizona with her family and graduated from Sabino High School in Tucson. She returned to New York to study musical theater at the American Musical and Dramatic Academy.

Returning to Arizona, in 2002 she helped create the Tucson based comedy troupe Not Burned Out Just Unscrewed, which is still performing. For four years she served as artistic director of the Insurrection Theater in Phoenix. She currently works in the box office at the Herberger Theatre Center.